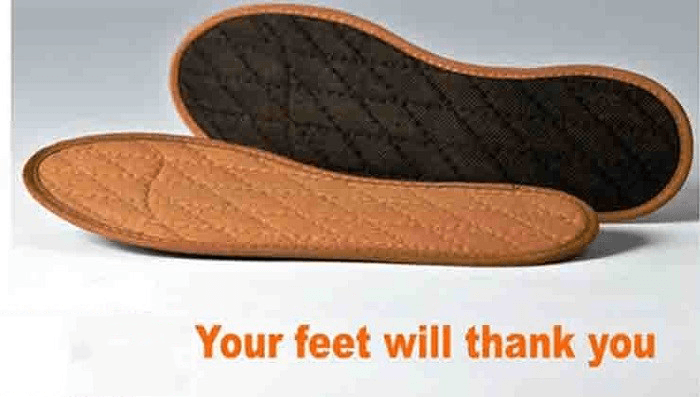 Smelly feet may be at the root of a lot of jokes, but in reality, they are no laughing matter. If your feet smell bad when you take your shoes off, it can be embarrassing. If your shoes themselves smell bad, it can feel even worse. There are dozens of home remedies and products to help with foot odor. But, if the bad smell is coming from shoes, it’s best to start at the source. That’s what insoles for foot odor prevention are a great idea to consider. Odor in your shoes and on your feet typically stems from excessive sweating. That’s why it’s so important to wear cinnamon insoles. Everyone sweats, but some people seem to be more prone to it.

Cinnamon Insoles are made with strong cotton outer lining to last long and filled with 100% natural cinnamon powder. Cinnamon is well known to absorb humidity and emits a pleasant natural fragrance.

The Anti-bacterial qualities of the Cinnamon Insole will stop foot odor and are effective against inflammations (athlete’s foot).Regulates vital points under sole of your feet whilst gently massaging the foot.HAND MADE USING NATURAL PRODUCTS- Chemical free cotton and cinnamon to keep feet dry, soft and warm with no more embarrassing foot or shoe odors and a life span of around three (3) monthsDEVELOP BETTER FOOT HEALTH!-Recent studies indicate that the absorbed cinnamon oil can help to lower lipid levels and reduce pre-diabetes symptoms plus regulating the acapuncture points of your feet

RECOMMENDED USE AND CARE OF YOUR INSOLES:

Thank you for choosing to purchase our high quality Nachbon cinnamon insoles.It is “naturally good foot climate” with the effect of cinnamon powder.We pay attention to a natural, healthy and high quality product from production to processing.

1/Can I cut the cinnamon insoles to fit inside my shoes?No, because of the herbal powder inside they should not be cut.2/ How can I determine the correct measures for the correct size?For a simple determination of the correct size please see the “Size Chart” on the footer3/ How long can I use the cinnamon insoles / how long does the effect last?The cinnamon insoles can be worn for up to 6 months. However, we recommend changing the insoles every 3 months for an optimal effect.4/What can I do if the cinnamon insoles are moist?Just remove the cinnamon insoles from your shoes and place them in a dry, warm place for drying.5/Can my skin irritated when wearing cinnamon insoles?Our cinnamon Insoles are tested for allergic substances. However, if you have allergy to cinnamon or ginger, please do not use the insoles because you might have allergic reaction when wearing them.6/My feet / socks are slightly yellowish after a few days wearing cinnamon insoles. Why?We use a high-quality cinnamon varieties with a high extract content for a long-lasting effect. This cinnamon extract can make sensitive skin yellowish, but this discoloration is harmless for skin and health. Also discolored socks are cleaned again after washing. The discolouration diminishes over time.7/Will my feet and socks smell strongly of cinnamon?In the first few days you notice the pleasant smell of cinnamon. The intensity will be decreased quickly so that the cinnamon smell does not stay at your feet or clothes except a slight fresh scent.8/How long can I store the cinnamon insoles?The cinnamon insoles are packaged in airtight PE bags. In their unopened package they can be stored for up to 2 years without losing their effect.9/Are the cinnamon insoles suitable for all shoes types?Basically yes. However, depending on the shoes shape and shank, the insoles could fit better or not so good. Therefore, the size of the insole could be a little smaller or larger than your shoes size. In this case you could use a small strip of double adhesive tape to prevent slipping of the insoles in your shoes.10/Can the insoles be worn in sandals?Yes if you choose one to two size smaller than usual, so that the insoles will be located “invisible” under your feet. To prevent slipping you could fix the insoles with your sandals by using a small strip of double adhesive tape along the bottom side of the insoles.10/Which kind of cinnamon is used in the Nachbon insoles ?One of the 50 fundamental herbs in traditional Chinese medicine is Cassia cinnamon, which is also used here at Nachbon. Unlike Ceylon cinnamon, which is mainly found in foodstuffs, Cassia Zimt is best suited for external use thanks to its special property: “Cinnamomum cassia is a medicinal plant that contains a range of bioactive substances, including cinnamic aldehyde. Studies of cinnamic aldehyde treatment in mid-aged rats have resulted in alleviation of chronic unexpected stress-induced depressive-like behaviors. Cinnamic aldehyde is an enzyme inhibitor drug, immunologic drug, and an anti-inflammatory drug. It is administered orally to treat behavioral and mental disorders, targeting the hippocampus and the frontal cortex. Current findings might be beneficial in treating subjects in depression.…“(“Cinnamomum cassia”, https://en.wikipedia.org/wiki/Cinnamomum_cassia, 08.12.2016).11/For whom are the cinnamon insoles not suitable?

Basically the cinnamon insoles are suitable for all. Only people with allergy to cinnamon or ginger should not use these insoles. For pregnancy: as a precaution, cinnamon insoles should not be used because of the metabolism-stimulating properties of cinnamon.