Awaken the soul of Tra My Cinnamon brand - Hương Quế

Awaken the soul of Tra My Cinnamon brand

Trang chủ » Awaken the soul of Tra My Cinnamon brand 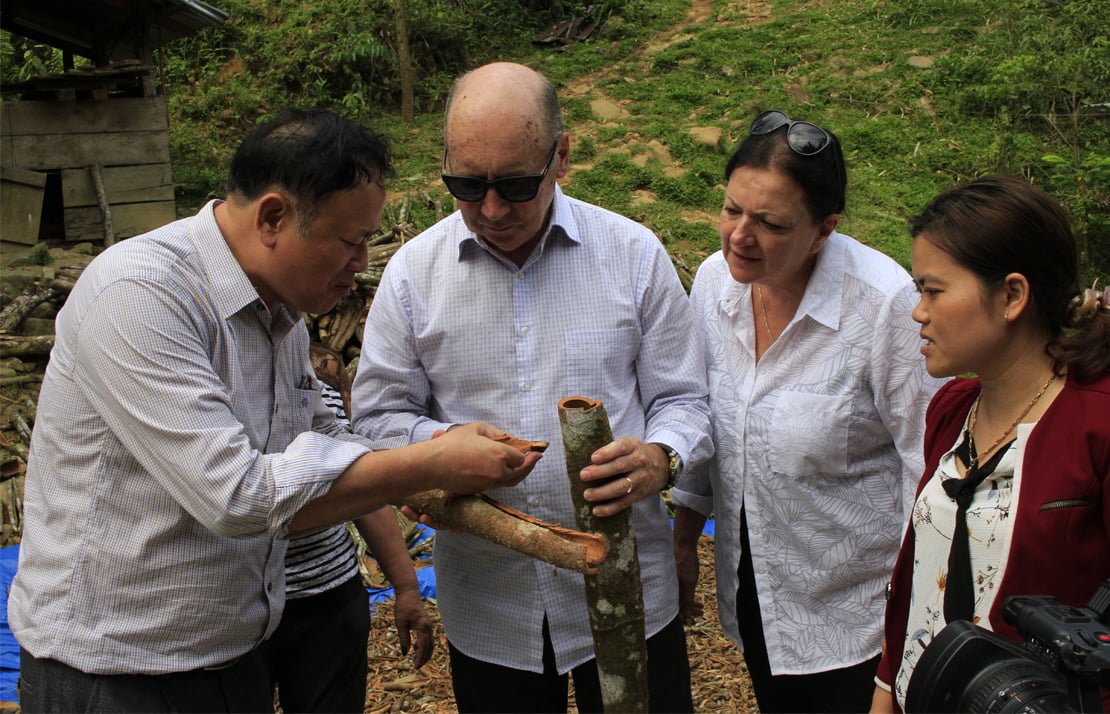 Awaken the soul of Tra My Cinnamon brand

On April 12th, the People’s Committee of Nam Tra My District, Quang Nam Province, Tra My Cinnamon Association organized the Conference “A solution to promote investment and development of Tra My cinnamon tree“, in order to get opinions from businesses and cinnamon growers, scientists, partners and find the major solution for Tra My cinnamon preservation and development.

Mr. Tran Van Man, Vice Chairman of Nam Tra My District People’s Committee said that cinnamon trees have been associated with customs, practices and spiritual, economic and cultural life of Tra My ethnic people. In the 80-90 years of the 20th century, cinnamon trees, especially Tra My cinnamon has very high economic value, known as “Cao Son Ngoc Que” (the precious cinnamon from the high mountain). Cinnamon products have been consumed largely in the domestic and export market and become a major source of income for cinnamon growers such as many households in Tra Leng, Tra Don, Tra Tap communes, etc. Cinnamon tree also becomes a key economic tree of Tra My district.

In order to keep the precious gene from Tra My cinnamon, since the re-establishment of the district until now, Nam Tra My district has set the development targets of cinnamon into the quarterly and annual resolution of the term; The People’s Council of Quang Nam province also has a thematic resolution on the Tra My cinnamon preservation and development; In October 2011, the National Office of Intellectual Property issued a certificate of registration of geographical indication “Tra My” for cinnamon products Vo Tra My (Quang Nam). This will create new opportunities for the development of cinnamon in the district.

Currently, in Nam Tra My district, there are 10/10 communes growing cinnamon, the output and cinnamon area are constantly increasing over the years, the total area of growing ​​cinnamon is 2,864 ha, the output in 2017 is 350 tons., an increase of 200 tons comparing to 2011. In recent years, the cinnamon market is vibrant again, the price of cinnamon products has gradually improved, so that cinnamon growers can gain incomes from cinnamon.

However, the current disadvantage is that the production and consumption of cinnamon products in Nam Tra My district has not been well implemented. There is no company signs production contract to consume products; therefore; farmers could only sell raw products with low prices and this action is making cinnamon grower stressed and anxious from not being able to sell any cinnamon tree products.

On behalf of cinnamon farmers, Mr. Phan Quoc Cuong, Chairman of the People’s Committee of Tra Leng Commune, Nam Tra My District, said cinnamon growers always wish to have stable cinnamon purchasing facilities and technology transfer in order to enhance product value. In addition, there should be a more stable cooperation mechanism between businesses and growers to collect and purchase cinnamon products such as cinnamon branches, leaves, wood stems and help people to thoroughly treat diseases of cuttlefish on cinnamon trees.

Cinnamon Tra My can become a global brand

Reggie Turner, an Australian businessman who specializes in marketing, selling and distributing cinnamon products said his customers in Australia and the United States are very pleased with the superior quality of Tra My cinnamon compared to other types of cinnamon, for example: Sri Lanka cinnamon. Tra My Cinnamon should be internationally recognized as premium cinnamon that can be produced into high quality health care products.

However, in order to have good products, it relies heavily on the farmers to protect cinnamon growing areas, develop cinnamon quality and invest in new cinnamon growing areas. Unfortunately, farmers cannot afford to pay for those fees, therefore, the cooperative model between farmers, scientists, authorities, producers, distributors and sellers must be implemented.

According to Mr. Reggie Turner, the demand for medical and herbal health products is increasing worldwide and we expect Vietnam to meet international demand. He believes that Vietnam can build a global brand for Tra My cinnamon. This brand will add value to cinnamon products which are grown and produced in Vietnam as well as bring higher incomes for farmers after harvesting cinnamon.

According to Mr. Nguyen Xuan Son, Director of Huong Que Production, Processing and Export Co., Ltd, Tra My cinnamon is a very high quality cinnamon, but with the current international market demand, we must choose a different way to grow, care, exploitation and preservation with organic standards to create clean cinnamon products. In the short term, we would pilot a cinnamon-growing area in Tra Leng commune with organic standards and expand this model to improve Tra My cinnamon brand value.

At the same time, specific guidelines in exploiting and preserving after harvesting to preserve the quality of cinnamon to create higher value in trade and processing high value products is required and necessary for local people. Besides, the sales of young cinnamon which decrease economic profitability of cinnamon growers should be mitigated.

According to Mr. Son, in order to protect the Tra My cinnamon brand, the locals need a better solution to prevent all other types of cinnamon from entering Quang Nam’s territory and affecting “Cao Son Ngoc Que” (the precious cinnamon from the high mountain) reputation. At the same time, propaganda must be strongly promoted so that cinnamon growers can understand, preserve and protect Tra My cinnamon; boost investment, widely promote this type of product to international market. By doing that, it will not only help to conserve the value of Tra My cinnamon as of the 80s of the last century and enhance the cinnamon value in the future.